Meet the elephant’s closest living relative!  Hard to believe, yet in distant times they evolved from the same family branch.  They’re incredibly tough creatures, adapted to harsh living conditions from coast to the high altitudes of Table Mountain.  They seek shelter in rocky outcrops where they are protected from predators.  Typically the females have two to three offspring.  The two in the photo above are about a month old. 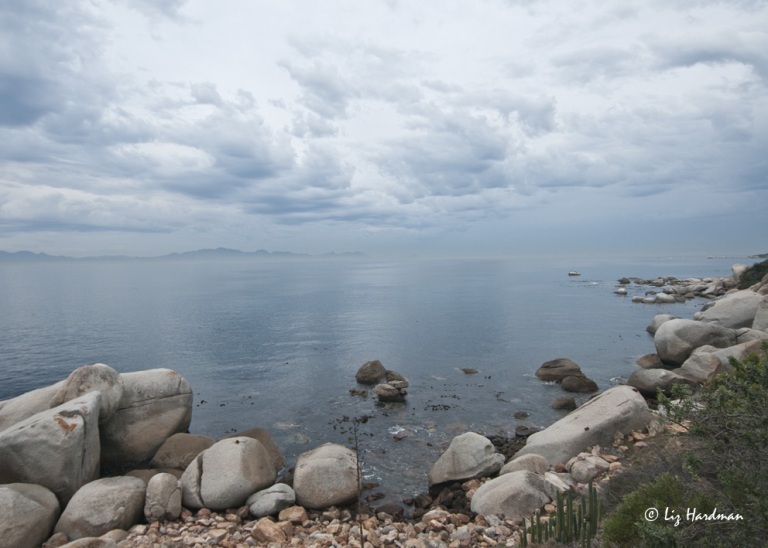 There are a number of colonies around the coastal area.  Sentries keep a look-out for danger and signal a high pitched alarm to alert other members when out grazing.   If you look carefully there are a couple on the rocks in the photo.

The gestation period is 6 – 7 months, and the mothers suckle their young for a period of about eight weeks. There was a lively batch this last summer in the colony close by, with 15 babies in the ‘clutch’.   They’re a delight to watch with their playful antics, like fleas jumping around.   Occasionally we’ve seen baby mongooses and dassies interacting,  dashing after each other, playing tag.

This little fellow was quite an adventurer.  Well before his siblings found their feet, he was off investigating his surrounds. In what was highly unusual behaviour, he would be seen foraging on seaweed right at the edge of the receding waves.  My neighbours named him Christopher Columbus, for his pioneering spirit.  We’d recognise him by his lighter coloured fur and then he was gone, set off to sea?  And more disappeared until we spotted a rooikat (caracal) in the vicinity and realised why their numbers were dwindling.

3 thoughts on “Rock Hyrax, a relative of the Elephant!”