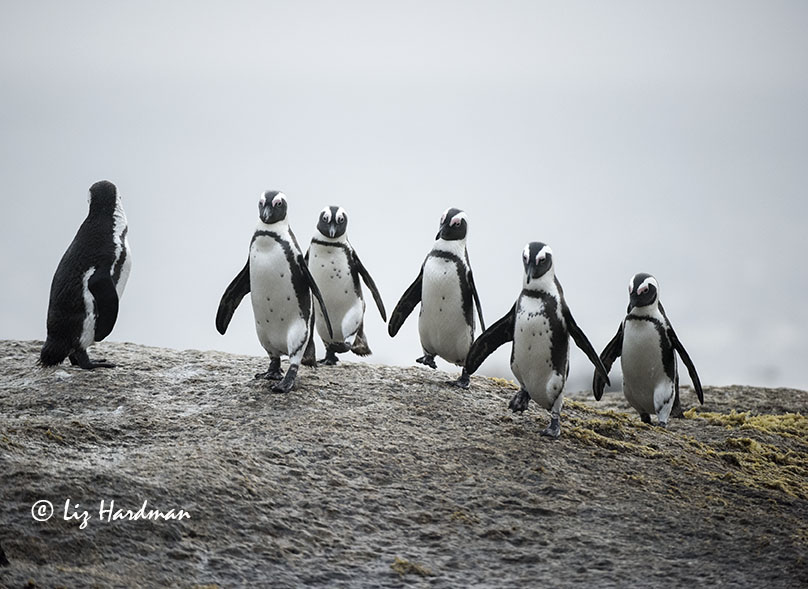 There's always quite a hubbub in our local penguin colony as the penguins rouse at the start of a new day. Cute as they may look, they have excellent voice projection, and their loud 'braying' calls can be heard from some distance.  Like commuters gathering for the daily grind, they can be seen emerging from their nests and waddling from far and wide to the nearest assembly points.  Once there a spot of preening and a 'limbering-up'routine precedes the moment before they enter the water.  They set off in groups – safety in numbers is their strategy in confusing the predators.

Sadly the African penguin population is decreasing fast and the species is listed as endangered.   From an estimated one million breeding pairs in the 1930s, less than 2% of the population survive in the wild today. According to the figures released by the S.A Department of Environmental Affairs in 2012 there are 18,683 breeding pairs in the wild.  Commercial over-fishing, pollution and predation add to the threat of their survival.

The Boulders colony has an interesting history having started with just one breeding pair in 1984.  The story goes that a number of rehabilitated penguins rescued from an oil spill near Dassen Island were released from False Bay and this couple instead of swimming back to the rocky island discovered the idyllic coves of one the peninsula's premier beaches in the heart of an urban area.  As the population grew their presence wasn't at all welcome.  Onto the scene came Van, the Penguin Man who took an interest in the welfare of the penguins.  Mr van der Merwe, a retired naval officer set up station on the beach and became a noted guardian.  Scientists and local residents have been astounded by the rapid growth of this colony which increased on average by more that 60% per year.  However the numbers peaked to around 4,500 and since then have tapered off to 3,069 according to 2014 figures.  SanParks formalised the area into a conservation area while the colony has expanded beyond the formal boundaries and the area to the south, Burgher's Walk is managed by the City of Cape Town.