The flock of grey cranes moved with skilful elegance. I watched under a spell as their fluid movements transformed into a dance as they crossed the green fields.  They are South Africa’s national bird emblem.   That’s telling,  a choice not of strength, or endurance, but a symbol of grace.

In other cultures cranes are also revered and featured in myths and legends.  In Taoism the red crowned crane is a symbol of longevity and immortality.

Another South African species is this showy grey crowned crane: 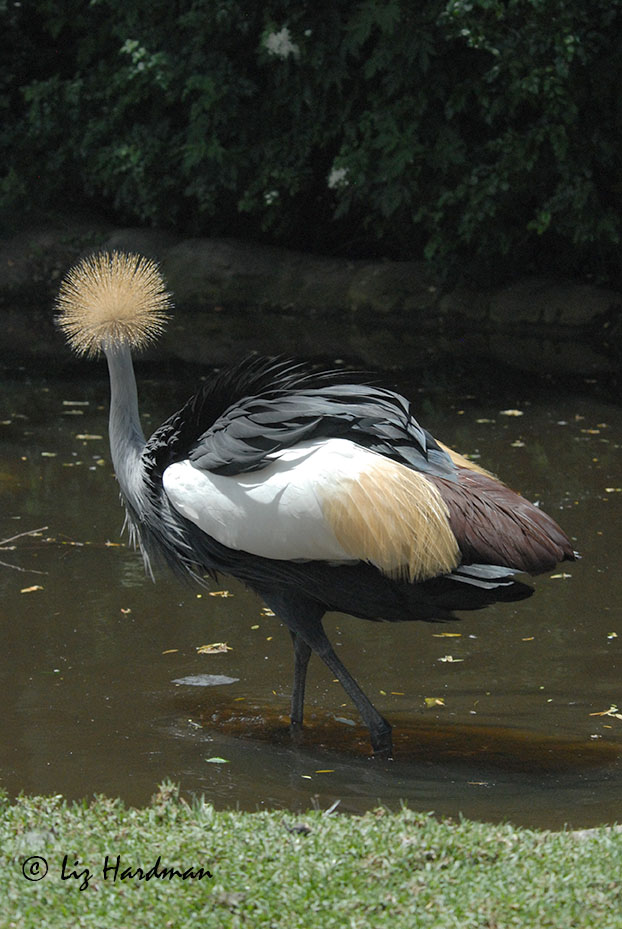 The third local species is the endangered wattled crane whose numbers dwindled down to 235.  A programme for recovery is helping to restore the numbers and the Wildlife Conservation Trust has purchased a corridor of land and consolidated it to form the Greater Karkloof Conservation Area.  Here the habitat includes irreplaceable mist belt grasslands which supports these critically endangered birds.

It’s troubling to learn that eleven out of the world’s fifteen crane species are in trouble.  Threats include habitat loss, power line and/ wind generator collisions as well as accidental poisoning.

Over on the other side of the world is the extraordinary account of the recovery of the Whooping Crane.   An inspiring blog which I follow with much interest is Kathlin Sickel’s www.badgerandwhoopingcrane.wordpress.com   Based in Wisconsin she tracks the status of this endangered species.   It’s a fascinating story, one which entails extraordinary dedication and a quest where each new precious hatchling is tracked and helped along to up the survival rate.  Of special interest is their flight training through the use of micro-light aircraft and the imprinting of their migration flight path.

Some time ago I came across an interesting article in an old Reader’s Digest publication (1964) titled ” The Race to Save the Whooping Crane”  written by Peter Farb.  Fifty years ago he described their near extinction, and it goes even further back -to 1912 when the naturalist E. H Forbush had pronounced that they were doomed.  The account continues with great concern that a couple of decades later their once tremendous wintering range had shrunk to a pinpoint on the Texas coast.  Hence to protect the few surviving birds, in 1937 the Aransas National Wildlife Refuge was set aside.   Still there were issues, when onto the scene came “an energetic, cigar-chomping, rough-and-ready naturalist, the late Robert Porter Allen who headed up the recovery project.  He was overwhelmed by their magnificence – “their man-high noble bearing, their yard-long stride, their wild trumpeting, their untamed spirit.”  To him the whooper was like a great “prehistoric bird prancing over the mud flats.”  His  gruelling adventures in tracking down the last of the nesting areas in Canada makes fascinating reading – “finally a marshy land interlaced with shallow ponds and lakes” .  It was at Wood Buffalo Park where the nesting grounds were identified.   The article ends “As a species, it has a precarious hold on life, but it is holding on.”

It’s heartening to read that fifty years on, against so many odds,  the recovery of whopping crane continues.

Here in South Africa a committed recovery programme is in place for the endangered wattled cranes.   Let’s hope that they too will increase in numbers in years to come.