It rained on New Year’s eve here in Cape Town and we awoke at dawn on the morning of the 1st to the gentle patter of raindrops still falling.  Now five days later it’s back to parched earth and the dam level aggregate has dropped to 29.1%.  We are worried; very worried.  The City Council warns that Day Zero could happen as early as 18 March – that is when the taps will be switched off and citizens will have to queue for water at designated collection points.

Meanwhile the summer season is in full swing; beaches, scenic sights, vineyards, restaurants are all buzzing with festivities and happy visitors.   At times residents feel overwhelmed and scuttle off to the lesser known spots. Or get up early to beat the queues to the beach or nature parks.

This past week the mornings have been sweetly scented and cool and as we’ve set out to hike or cycle through our favourite nature reserve we’ve tended to see animals on the move, generally moving through an area foraging.   Recent sightings of five different baboon troops highlight how their behaviour changes when their territory overlaps with the park’s recreational areas or how the attractants in town, like the refuse bins lure them off the mountain. For most of the year the baboons forage on natural vegetation or in the rock pools.  Come summer and the picnic spots draw them like bees to a honeypot.

Below the Buffels troop check out the barbecue area for scraps. 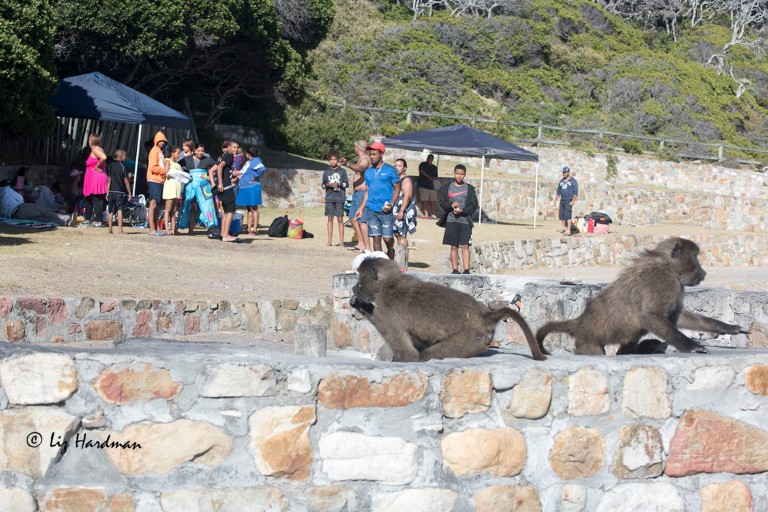 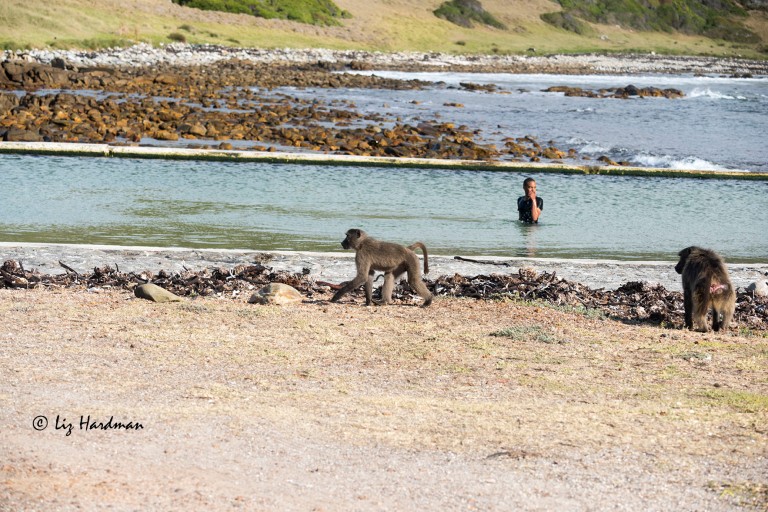 In contrast the baboons in the photos (below) of the Kanonkop troop like to forage in natural vegetation. 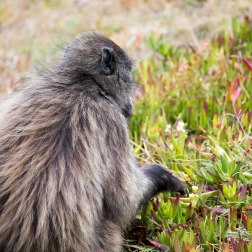 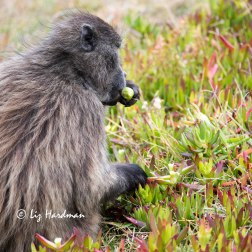 The fruit of the sourfig is high in vitamin C 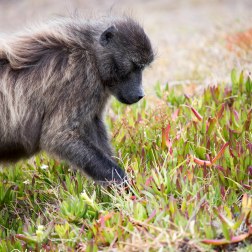 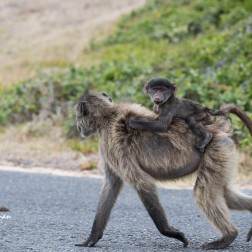 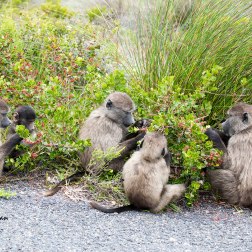 A favourite scene – juveniles with a baby picking the berries from Rhus crenata. 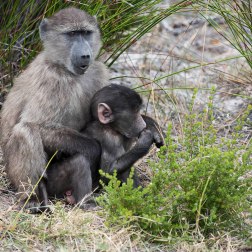 Sister is playing nursemaid and keeping an eye on baby while mum forages. 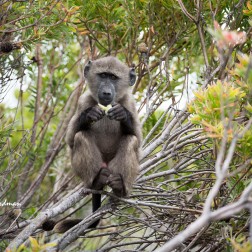 So intent on eating his meal of Leucodendron cones. 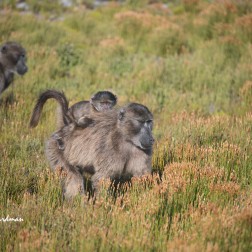 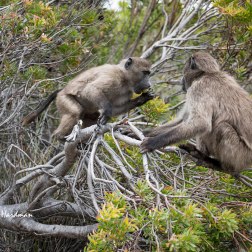 There’s always time for a bit of rough and tumble.

On the Atlantic side of the Peninsula, another troop – probably the Olifantsbos troop dash across the beach in a strong breeze to get to the rock pools to forage for mussels and other shellfish delicacies. 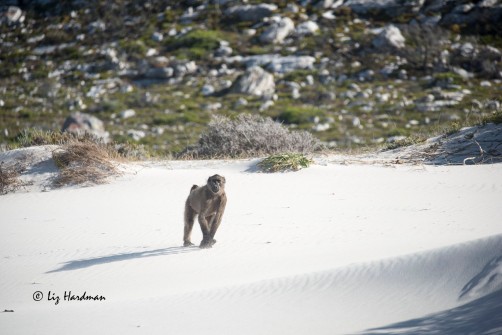 Beach scene when the wind was blowing. 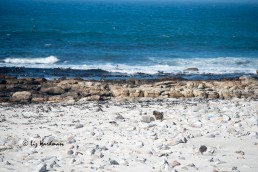 Heading to the rock pools. 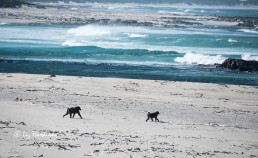 The dash across the beach. 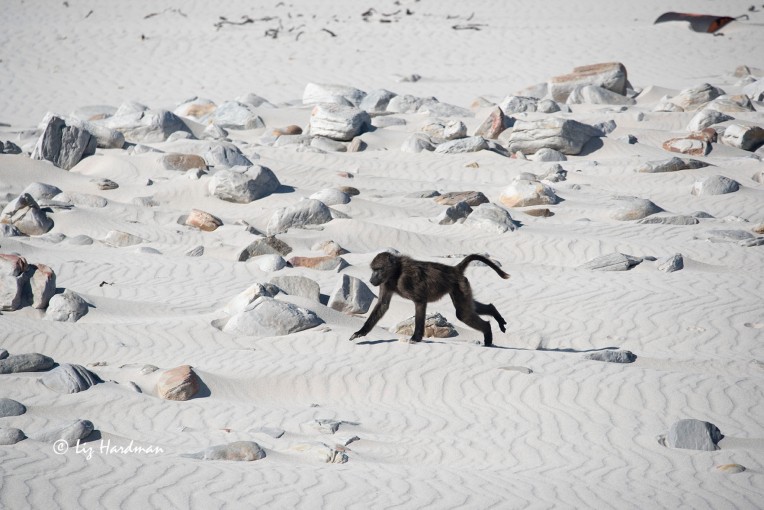 The sand was stinging that day.

The Smitswinkel troop are generally kept off the road by the conservation rangers, but this season we’ve found them on the road several times – a hazardous situation for both baboons and motorists. 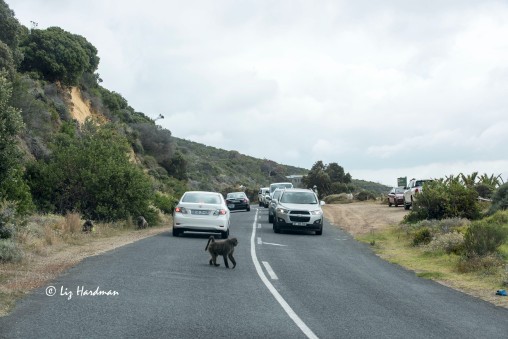 Smitswinkel troop on the road. 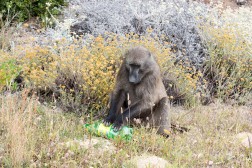 Every piece of plastic is a target for inspection by the baboons. 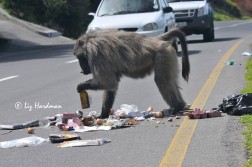 The contents of a refuse bag. 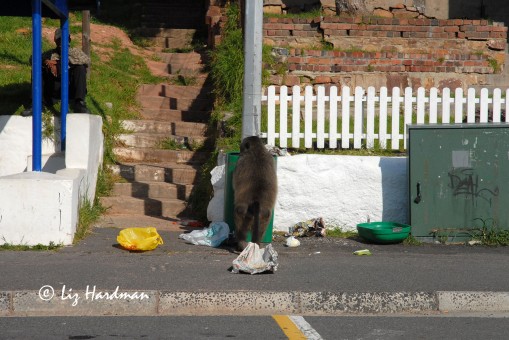 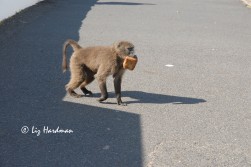 Bread has a high calorie reward for a baboon. 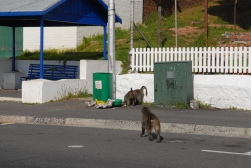 Street bins are not locked and the lids easily knocked off.

28 thoughts on “The Summer Season”