There are layers here, interwoven with mystery and symbolism, in this ancient capital of the Khmer Empire.  Set in the dense jungles of northwestern Cambodia, the Archaeological Park stretches over some 400 square kilometers across hot and torpid plains.   Wandering through the labyrinthine sites, where rampant vegetation threatens to devour the masonry, one can’t help but be cast under a spell.  The added effect of the dark, storm clouds gathering through the heat of the day,  made it feel quite atmospheric. 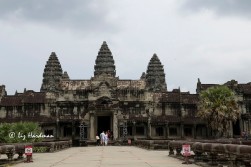 The largest religious monument in the world, Angkor Wat literally means the “City which is a Temple”

Historical stories are revealed through bas reliefs carved into wall panels and over pediments.  Hindu legends based on the Ramayama and the Mahabharata portray fabulous scenes: epic battles, cosmic myths, of sentinels and guardians who protect portals and the primordial conflict between gods and demons.   There’s celebration too, dancing nymphs and triumphant processions in the gathering of amrita, the ambrosial nectar that guaranteed immortality.

Scenes from the Battle of Kurukshetra.

The sensual apsaras (dancers) each one different from the next. Holding alluring poses, they are shown wearing ornate jewelry and exquisite headgear.

There are revered animal avatars too.  The king of the monkeys, Lord Hanuman, who was the son of the god of wind and who could thus fly, was sent on missions of reconnaissance; and the monkey soldiers went out to support good deeds. As did the elephant deities, Ganesha and the three-headed elephant Airavata.  They appear represented in stone carvings on pedestals and at victory gates, so tall and proud.   Depicted in a principal scene, carved into a 300 meter long terrace, elephants are hunting under the guidance of the mahouts charging through the foliage using their trunks to fight off tigers. Elsewhere they can be seen holding a cow or holding a man upside down.  Another scene shows them decked out for a Royal procession led by the King and attended by his royal court.   The three headed elephant – Airavata, flanks the stairway, representing rain and prosperity. 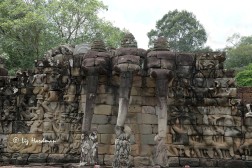 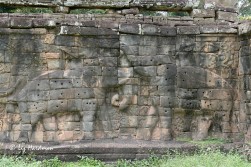 Scenes from the Elephant Terrace.

The atmospheric setting of Ta Phrom

Ta Phrom was the setting for the movie “Temple Raiders” and this is the famous Lara Croft doorway framed by the crazy root system of the strangler fig.

Against this evocative backdrop, other characters appear, shape shifting into view – the monkeys scaling temple stones, posing like gods.  An elephant carrying sightseers, a shadow passing by as his long gone ancestors would have done crossing the parade ground in front of the elephant terrace.  Avatars moving in temporal shifts.

15 thoughts on “Angkor: Myth and Mystery”