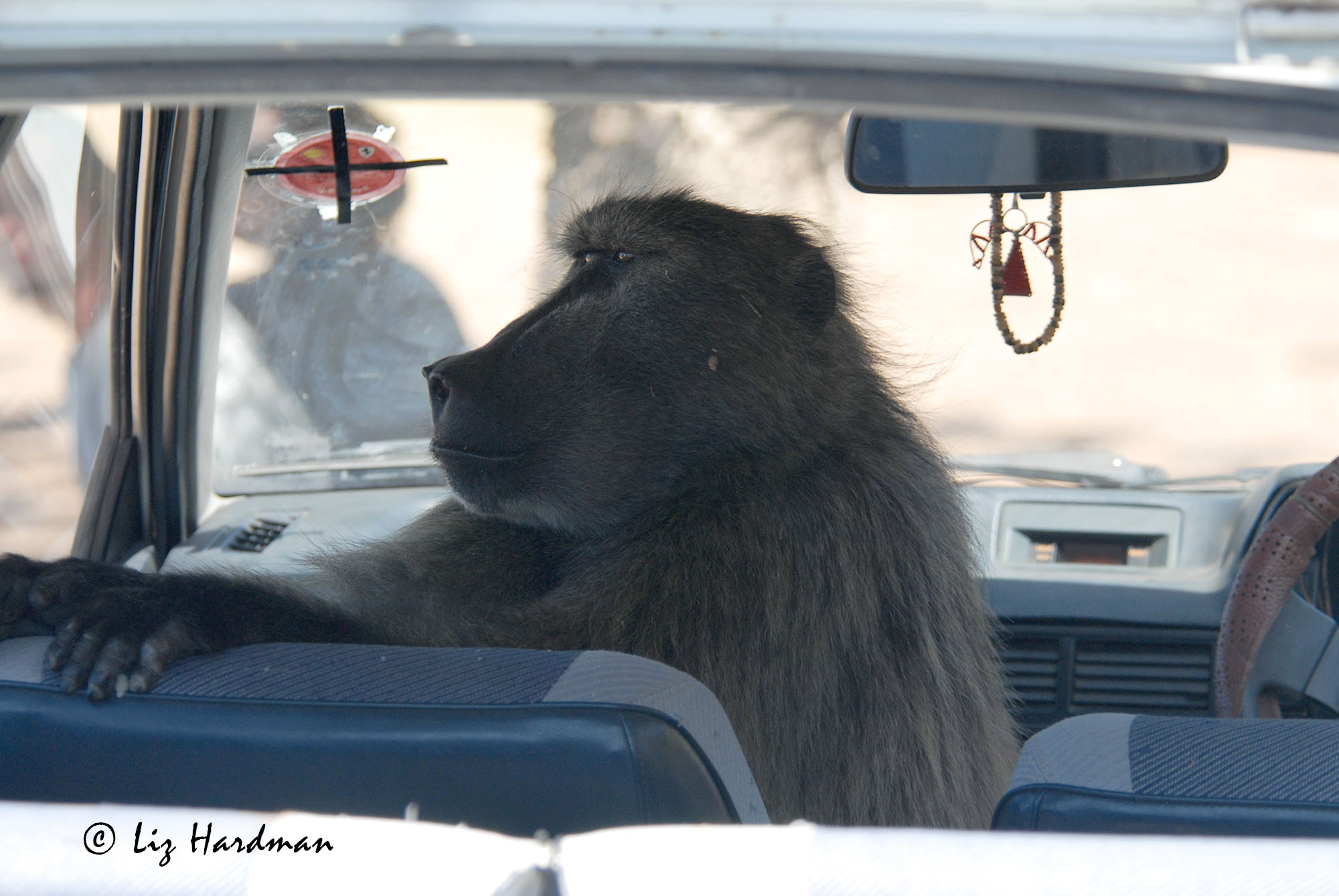 The baboons of the Cape Peninsula, here on the urban edge, have a much different existence from their relatives in the wild.  Primarily it is all about exploiting situations for maximum food returns.   As their fear of humans diminish so increases their daring and confidence in ‘raiding’ in residential areas.  They have an amazing ability to adapt: savvy, athletic and aided by excellent acuity of senses.   Baboons in raiding mode are often unstoppable, high on adrenalin they take huge risks and push the limits.  As many residents living in the far south peninsula have experienced, baboons invading houses can not only be a frightening experience, but distressing.  Frequently the damage they cause and the mess they leave drive home owners to despair and outrage.  The occurrence of house raids escalated to such an extent that solutions had to be found in driving the baboons back to the mountains and so return to foraging in the natural fynbos vegetation.  Plus they fulfill a vital role within the ecosystem.

In June, 2009 a civic project was set up which experimented in finding ways to manage baboons by setting ‘virtual boundaries’ through the use of noise deterrents, in this case ‘bear bangers’ and through the sound of the ‘crack’ of a sjambok whip.  There were howls of outrage from animal activists, who objected to the whips, miscasting the use to that of striking the animals, which was never the intention nor applied.  Working with the Smitswinkel troop in the Simons Town area, it had a successful outcome and became a part of the strategy adopted by nature conservation contractors appointed by the City of Cape Town to manage and minimise human/wildlife conflict.

From 2010, City of Cape Town took on the responsibility in providing the contractors to manage eleven (out of 12) troops living outside the Cape of Good Hope nature reserve along the suburban edge; the southern troops as well as those in the Constantia Valley. The rangers at that time, working for the Nature Conservation Corporation’s (NCC) initially had good results.  Certainly in the Simons Town area, the Smitswinkel troop (except for the odd dispersing male) stayed out of the urban space for three years.

But is was never going to be easy as there had to be a collective buy in from the residents – from householders through to users of the campsites / recreational areas, cafes etc to secure attractants such as garbage bins, vegetable gardens, fruit trees and to stop easy access into buildings.

As an example this is what happened to the Smitswinkel troop. They settled back in their old home range, between Millers Point and Smitswinkel Bay (a distance away from the town area) raiding with ongoing frequency – the  problem being that the area contains a hub of public amenities – an open restaurant, caravan park, boat launching slip,  picnic areas, scenic vantage points, tidal pool, and also includes the road to Cape Point, a popular scenic route for tourists.

Then in August 2012, new baboon management contractors, Human Wildlife Services adopted a more radical approach using pain deterrence through the use of paintball guns in an attempt to curb raiding. The baboons continued to weigh up risk versus reward; and for many of the adult male baboons reward still continued to outweigh risk.   Habitual raiders tended to develop aggressive behaviour and in terms of the raiding protocol individuals were monitored and after so many strikes were then destroyed (euthanised) by the conservation authorities.  Often the root cause for this raiding pattern- and which is still the case today –  is the lax attitude of the residents / authorities in not securing attractants nor in implementing by-laws to legally enforce conservation practice.  Killing off too many of the so called “rogue” male baboons skewers the gender ratio in the troops which also affects the hierarchical structure.

After killing off the “problem” males, the Smitswinkel troop for some years did settle back into natural foraging patterns and the scenes in the photos below are  largely a record of the past.  On a positive note, by herding them off the road along the scenic route, there were fewer opportunities for motorists to stop to illegally feed the animals, so the incidents of car raiding have largely stopped.   Miller’s Point though, with it’s picnic areas and restaurant is still not fenced and continues to be an attractive raiding option.

2020 is now upon us and this particular troop, which in the past had been highly impacted by human induced injury, is faring much better.   Their numbers have increased though we notice that last year when a new dispersing male arrived on the scene to challenge the alpha male, the troop dynamics changed.  Initially the troop split, some following the old leader, the rest the more daring, dynamic new alpha.  Soon afterwards he came snooping into the neighbourhood bringing along the others.  For some months house raiding was on the up, giving the rangers the run around.   It all appears to have settled down and there is some cohesion within the troop again with the displaced male reconciled to the lessor ranking.  Here’s hoping they continue to fare well through this new year.

15 thoughts on “Baboons on the urban edge”

Leave a Reply to Out Walking the Dog Cancel reply