There’s that delicious anticipation between planning a journey – reserving flights, sorting the itinerary – to the moment you’re off, heading to the first destination.   It may all be mapped out but then happenstance unfolds….

Soon after landing in London in late February, the “Beast from the East” appeared. Ominous meteorological phrases described the impending storm  – “a sudden stratospheric warming over the Arctic”,  ” a weakening Polar vortex”  and conditions descended into chaos as The Beast arrived bringing in freezing Siberian air blanketing the country in layers of snow.  The temperature plummeted and in some places went as low as -12*C.

Early daffodils before the big freeze.

Crocuses spring forth snow or shine.

It was all rather surreal, as if the dynamic pulse of London just stopped and was rendered into a stillness under the blanket of snow.  The transformation over the next days was radical – shape-shifting statues turned ghoulish, trees gathered softness in re-imagined Christmas scenes, icicles hung in delicate form, people were stranded, train and bus schedules were interrupted.  Deeper into the country the conditions were dire.

Taking a chance on 28 February when the weather was chilly but clear, i took a walk in Richmond Park, hoping to locate the deer near Potten Pools.  I found the ponds iced over and the ducks and swans skidding in clumsy manoeuvres.

Swan taking a run at getting airborne.

Swan, wing flaps down before take-off. 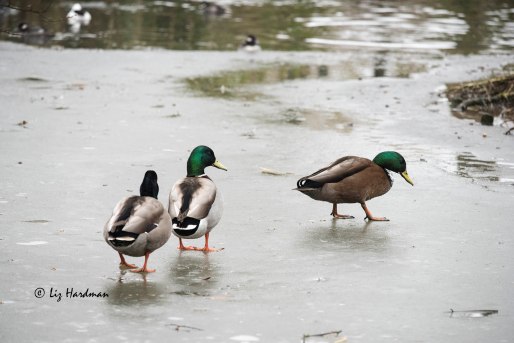 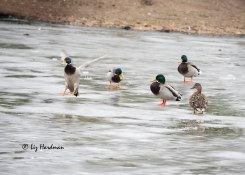 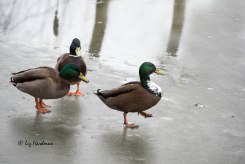 With nary a deer in sight, the yellowing jowls of the grey sky took on the look of wolves advancing when the snow arrived.  Visibility wasn’t too good.  Thank goodness for cell phones and Google maps as i had lost my bearings and was beginning to panic about the wind-chill factor.  Good fortune was restored as i stumbled upon the deer herd near the gate through which i wanted to exit. Though the conditions were not ideal for photography, i manage to get a couple of shots and then beat a very hasty retreat to the warmth of a nearby cafe.

More information on the Beast from the East here.

20 thoughts on “When travel plans unfold: The Beast from the East”