It’s been a while since i last posted and since returning home after some months of travel, it is heartening to be back in the rainy season.  And rain we have, buckets of it.  The dams are filling nicely and it looks promising that the harsh drought conditions are behind us.

My travel adventures begin to dim as i hook up again into the language of the familiar, but i’d love to share some of the experiences once i’ve got the photos sorted.  There are so many aspects when travel unfolds, from the hubbub of major cities to the quiet of the backroads.  Nature delivered some drama too, a bruising from the ‘Beast from the East’ to the unfurling of an exuberant Northern Hemisphere spring.  I had a lucky encounter with a Falconer and a Red kestrel working King’s Cross Railway station; stumbled across the Richmond deer herd in a snow storm, met “Cheddar Man” at the Natural history museum; rambled over hill and dale where meadow flowers bloomed in profusion.  All the while discovering new habitats and learning to read the landscape – from bluebell glades, acidic uplands, limestone pavements, salt marshes and water, water, water!  But most intriguing was seeing how nature finds it’s footing within eco-niches in densely populated urban areas.  Who’d have thought that a visit to Tate Modern would also bring a viewing of peregrine falcons nesting high up in the very same building or of foxes roaming boldly through some of the inner London suburbs?

Settling back again into a Cape routine, the dawn chorus comes rustling in with a guttural cacophony of Egyptian geese, hadedah ibis and raucous gulls.  I watch in delight as furry creatures scurry across the lawn (green and verdant now) – a mongoose scampers by with two pintsized, energetic juveniles, the baboons make quick unannounced visits, and so too, the nocturnal porcupine family with it’s gorgeous, prickly little baby.  Further along the road, the penguin nursery is in full swing attending to the raising of young.   This wild bevy of beauties makes my heart soar – here is a natural world right on the doorstep.  The wagtails and sunbirds are searching for nesting places and down below on the rocks the dassies sun themselves after the rain showers.  A single otter comes often, mud-bathing in the wet black soil.  My next door neighbours describe exciting sightings of two caracals, an adult and a youngster, and the opportunity to observe these secretive wild lynx at close quarters.

All in all it’s good to be back! 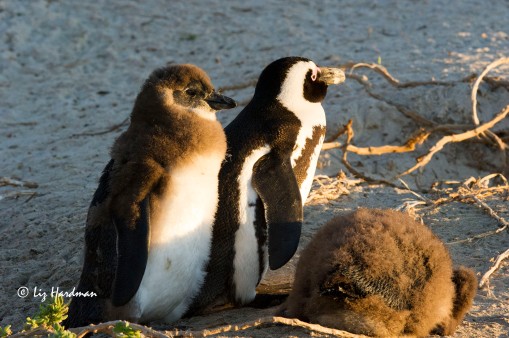 23 thoughts on “A quick look around the neighbourhood”